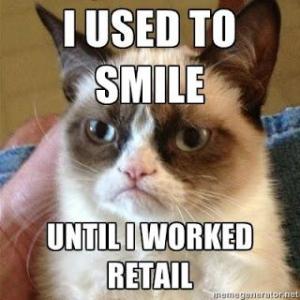 Minimum wage workers get the most shit in their job. They work the longest hours, often really early in the morning or long into the late hours in the night. They have to work public holidays, like Boxing Day, Bank Holidays, and New Years Eve and Day. They also suffer the terrifyingly awful role of having to endure stupid customers regularly. Retail assistants especially, get so much crap thrown at them on a daily basis and no one seems to care. One of my friends has just started her first job, as a sales assistant in M&M World, and she’s getting increasingly stressed out. I worked as a retail assistant (in one of the worst department stores, on frigging Oxford Street) for two years, and let me tell you now, it sucked.

You know that age old saying, “the customer is always right”? I’m here to explain to you that that is very rarely the case. Nine times out of ten, the customer is an utter idiot. To the point where you start to question how they even made it out of their bed that morning. Working in retail will also teach you that there actually IS such a thing as a stupid question, and that you need even more willpower than you think to not respond sarcastically. “No, madam UP TO 50% OFF does not mean half price… No madam, that is not false advertising.”

It very quickly became a theory of mine that people leave their brains and common sense at the door to the store they’re shopping in. How else do you explain the absolute fuckwittage of their behaviour? It also became abundantly clear that people, specifically female shoppers, are the rudest little shits on the face of the earth. I’ll never understand how or why they harbour so much hatred towards sales assistants. I’ll also never understand why they think sales assistants are their personal slaves. They are there to ASSIST you (note, that says assist, as in help, as in DO IT YOUR DAMN SELF UNLESS YOU HAVE NO IDEA WHAT YOU’RE DOING OR YOU PHYSICALLY CANNOT).

I hate the shoppers who go around singing the songs that are playing. Yes, because having to listen to that same song every hour, all day, just isn’t enough, so thank you so very much for singing along to remind me what an AWESOME song it is!!!

The worst kinds of shoppers are brides and bridesmaids. Rarely do you get a nice bride and group of bridesmaids. Often they want to be doted on, told how lovely they look, and want a brand new dress to try on and not buy for fitting, only to wipe their sweaty faces on it, simultaneously pulling off half their make-up covered face. Thank you for that, now I have to suffer the wrath of the next stuck-up bride who wants another brand new dress to try on and not buy. Twat. These are the same girls who, when finished in the fitting room, walk out of the cubicle with a “you’ll clear that up for me, won’t you?” before strutting off in their flip flops.
“Of course, dear, even though I have a long queue of complaining customers waiting to use the fitting room, an old lady who needs assisting with changing, garments to count and hang up when they’re not being used and a random child running around poking his head under curtains. But no problem, I’ll clean up after you…” And then you get there and everything is inside out, on the floor and there’s somehow one less hanger than you need even though you watched as she walked out completely empty handed. And then your head explodes.

God forbid you should ask them to hang the clothes up. They either flat out refuse, suddenly claim to not speak English, or spitefully keep them inside out and attempt to balance shirts on trouser hangers and ball up the trousers before “neatly” placing them down next to you, on the floor. What even does your wardrobe look like, lady? I love the excuse “no I don’t have the time for that.” So you have the time to try on the eight items, but you don’t have a minute to hang them up? Yes that makes total sense.

These are also the women who walk around the shop, picking things up and collecting entire wardrobes of items, just to dump EVERYTHING in a corner and walk out, leaving a mountain of clothes left for an assistant to pick up after you, while doing their ACTUAL job. You, my friend, are a terrible human and I hope you miss all your trains home, or your car breaks down.

Newsflash – they’re not there to follow you around tidying up behind you. Yes, tidying up is part of the job, but tidying rails and shelves to make it look presentable. It is common courtesy to NOT move stock around and make their job that much harder and irritating. Just don’t do it, ok?

Another terrible example of human are those who decide that their entire wardrobe needs to be re-bought. Five minutes before the store closes. What even are you doing out shopping just before 9pm in the middle of London on a weekday?!

If you work in retail in the middle of the city, you start to develop a certain disdain for tourists. Tourists who stand outside stations in massive groups in the middle of the pavement. Tourists who want to take pictures outside every damn store, even when it’s just a bloody Boots (it has happened. I walked through the picture.) Tourists that want to buy everything under the sun and have it wrapped up, and then complain when you spend too much time wrapping. If you want it quick, you get it shoved in a bag. If you want it wrapped up, then wait. I once got accused of being racist because I did not fold the clothes the way she wanted me to. That isn’t even a lie. It was the middle of the sodding Olympics, the place was packed, and I had a 9 hour shift. God I hated the bloody Olympics…
The biggest issue about tourists is the tax return. Don’t stand there and complain about how long it’s taking – you wanted to buy three and a half thousand pounds worth of crap, so you can stand there and wait while it all gets typed up and your giant-ass form gets printed off.

After all that crap of standing around on feet and having to deal with the worlds most annoying people (the customers), pay-day at the end of the month sounds exactly like heaven. You have dreams of sleeping on a bed of money. Dreams of going out to get wasted with your friends. Dreams of eating expensive food. Till you realise you earn minimum wage, and therefore can barely afford to live another month.

And then you have to go through a whole other month of the same bullshit customers and complaints, while dreaming of the day you can hand in your notice, work your last day, and not have to give a shit about any of those dickhead customers or bitchy managers, again!